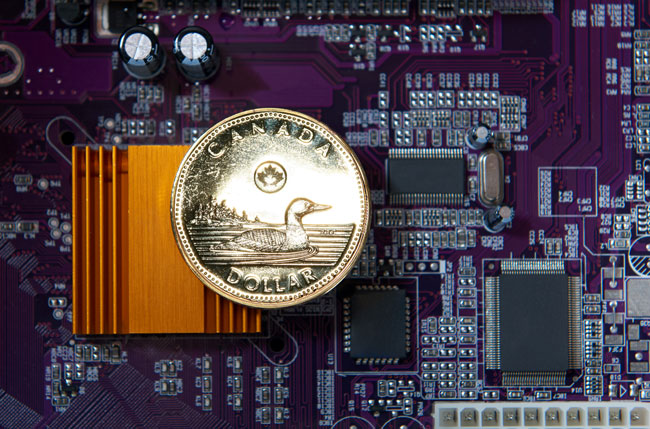 The Bank of Canada is formulating a contingency plan for a Central Bank Digital Currency — a “digital loonie.” A team of researchers from U of T and York University was one of three selected to submit a proposal on its implementation. (Photo composition created via Envato and Creative Commons (S. Rae))

Digitization is changing how people pay for things, and raising questions about the future: how much longer will Canadians be willing and able to use physical cash? Could an alternative currency, a digital one such as Facebook’s Diem Coin or Bitcoin, prove so convenient as to make the Canadian dollar obsolete?

Long-term planners at the Bank of Canada (or “the Bank”) are tangling with these questions now, thinking ahead to how Canadians will use currency in the future. That’s why in February 2020, the Bank announced it was designing a contingency plan for a Central Bank Digital Currency (CBDC), which sparked speculation of a brand-new loonie — a sibling to the banknote in digital form.

The Bank has no plans to issue a digital loonie at this time; regardless, the decision of “when” to introduce one is very different from “how.” As an active player in the research on digital money, the Bank is aware of the expertise in the university sector and thus launched the Model X Challenge in mid-spring of 2020: a competition for experts to propose a system architecture and business plan for a Canadian CBDC.

The team says that it will take another two to three years to properly implement a CBDC, and there’s little time to waste.

“You cannot click a button and have a CBDC tomorrow morning. This is a long technological, economic, legislative and cultural shift behind digital currencies,” says Veneris.

Long adds, “China has been working on it for over five years.”

The team pulled together their diverse expertise to tackle the design components from the perspectives of technology, economy, legal and global geopolitics: Veneris is an expert in system design, formal verification, techno-legal questions and crypto-economics; Long is a distributed systems and programming languages pioneer; Park, in his own words, researches how the plumbing of financial markets shapes economic outcomes; and Puri is an expert in securities law and regulation.

Professor Deepa Kundur, Chair of the Edward S. Rogers Sr. Department of Electrical & Computer Engineering (ECE), sees this kind of collaboration as a key to unlock solutions in critical sectors.

“A complex area like monetary infrastructure has such wide-ranging impact that a comprehensive analysis demands thought leaders from different fields,” she says. “The Model X Challenge is a good example of why ECE has prioritized cross-disciplinary efforts.”

Veneris, Park and Long have observed that the financial sector may be lagging behind when it comes to digitization.

“Billions of Internet of Things (IoT) devices have already made their way into our daily lives: our homes and cars, health care, manufacturing, supply chains and other infrastructure,” says Veneris. Park adds, “Yet payment, the backbone of all commerce, still operates on a legacy infrastructure that lacks the flexibility to adapt to this digitization of the economy.”

Park points out that you can buy things on Amazon and receive them the same day — but the seller only sees the payment on their account days later. This general delay costs businesses real money: the consulting firm Ernst & Young estimates that slow payments cost Canadian businesses $2.9 to $6.5 billion dollars a year.

New players are already emerging to exploit these shortcomings. In 2019, a Facebook-led consortium announced its intention to create a new financial payments infrastructure and with it a cryptocurrency known as Diem Coin (formerly Libra Coin), which is planned to launch in 2021.

“Facebook has 2.7 billion monthly users,” says Veneris. “Once Diem goes live, it will offer a wide range of functionality for retail payments and make it easier to conduct business. It’ll be as though Facebook became, overnight, the biggest central bank of them all.”

In addition to concerns about how Diem Coin would handle privacy issues, Park says that small economies like Canada could experience currency displacement: “People may stop using the native loonie, first for convenience and later out of necessity.”

Preventing displacement and protecting privacy were key questions that guided the team’s thinking.

In addition to data security, the team’s proposal considers a number of critical issues facing the launch of a new CBDL: it links the legacy infrastructure with the new, it has privacy-by-design to protect consumers and businesses, and it provides incentives for the private sector to innovate and excel in this new global digital economy while protecting Canada’s social values.

The team suggests a two-stage launch. In the first, the Bank alone would set up a working infrastructure to give people the ability to make a cash-like e-payments with the new digital loonie. (A secondary payment CBDL cash-card system would cover Canadians who lack internet access.)

Transactions between parties would involve no credit and be immediate, limited in size to a typical purchase at a grocery store or other retail outlet.

“You would go to a shop and scan a QR code and that’s everything you need to make a payment,” says Long. “It’s a viable, convenient payment mechanism that will be much cheaper for merchants to use than the current system.”

In the second stage, the system expands to an open but controlled network: a “permissioned” blockchain. Here, private sector entities take the lead role and build on the Bank’s initial innovation. Customers could keep their transactions private while being able to monetize their personal data to get extra services from the private sector.

Veneris emphasizes that this blockchain is not like Bitcoin, and that a CBDC is not a volatile asset that’s prone to speculation like many cryptocurrencies today.

“Think of it as an intelligent open-source social operating system for programmable e-money,” Park says. “A company like Tim Hortons can plug into it to develop an enhanced reward program, or a firm can customize a service for smaller merchants. Entrepreneurs will ensure the payment mechanism keeps pace with incoming tech: Internet-of-Things micropayments, for example.”

And in an emergency, the system is set up to revert back to the Bank’s full control.

Veneris, Park and Long are adamant that the Bank should spearhead alone this ambitious first phase. “The current payment systems are the private banks’ golden goose,” says Park. “You can’t expect them to kill it.”

While the Bank is looking at a herculean task, Veneris, Park and Long say that where the Bank leads, others, both locally and globally, will follow. Ideally, this would lead to many levels of government and the financial sector all rowing in the same direction to get the entire system up and running.

“The Bank has spent the better part of the last decade preparing for this moment,” says Park. “It has a head start over most other central banks in the world.” Veneris adds that “there are no excuses. This is Canada’s opportunity to be a global leader.”