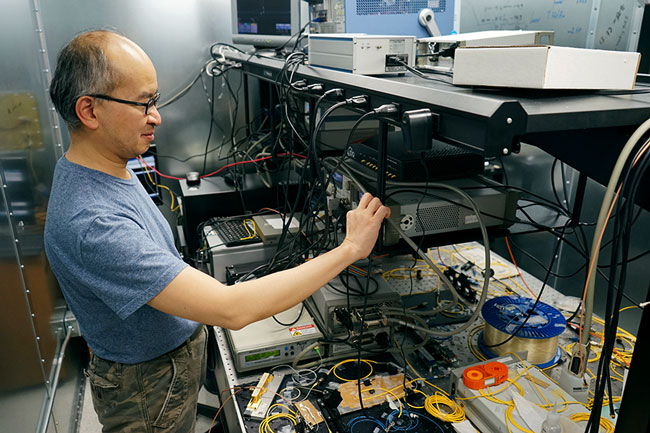 Professor Hoi-Kwong Lo, seen here in his lab, has been awarded with the Medal for Outstanding Achievement in Applied Photonics by the Canadian Association of Physicists and Institut National d’Optique. (Photo: Jess MacInnis)

ECE professor Hoi-Kwong Lo, who is cross-appointed with the Department of Physics, has received 2022 CAP-INO Medal for Outstanding Achievement in Applied Photonics. The national award, presented jointly by the Canadian Association of Physicists (CAP) and Institut National d’Optique (INO), recognizes his impact in the field of quantum communications, including his work in quantum cryptography.

“The growth in quantum cryptography over the last few years has been truly impressive,” says Lo. “It wasn’t long ago that some of the techniques being commercialized today were considered merely promising theories — now they’re changing how the world protects its data.”

We are in the midst of what’s been called the ‘second quantum revolution,’ where scientists have started to really take control of the special behaviour of photons at the quantum level. On one hand, quantum computing uses the properties such as entanglement and superposition to greatly speed up the rate at which certain mathematical problems can be solved, which could put private information at risk. On the other hand, quantum cryptography allows the construction of an information-theoretically secure encryption scheme — virtually unbreakable code.

A well-known quantum key distribution (QKD) protocol, called the BB84 protocol, was invented in 1984 by Bennett and Brassard. Lo and his co-author H. F. Chau published a widely cited paper in Science in 1999 that solved a long-standing theoretical problem in QKD. They proved that QKD achieves information-theoretic security — the Holy Grail of communication security — due to the laws of quantum physics.

“With QKD, two parties use a randomly generated key, known only to them, to encrypt and decrypt shared messages,” says Lo.

“To steal this key, you’d have to take some sort of measurement of the photons exchanged between them, and quantum mechanics tells us that this unavoidably disturbs the system. It creates anomalies that can be detected by the original parties.”

Lo’s group not only proved the information-theoretic security of decoy state, they performed — in collaboration with ECE Professor Li Qian — the world’s first experimental demonstration of their proposed practical protocols. Both steps were vital to the growth of a technology that is now used by companies such as Toshiba and Verizon.

When commercial QKD systems first came online, however, the photon detectors (though not the shared messages) were vulnerable to attacks. Lo and his team were the first to successfully hack these early systems, which provided them with valuable information for improvements.

In 2012, Lo and collaborators Marcos Curty and Bing Qi invented a new type of protocol, called measurement-device-independent QKD, which completely short-circuits all detector attacks, thus dramatically increasing the secure key rate and feasible distance between the QKD systems. This protocol is now standard in the field.

Other research successes for Lo include demonstrating the impossibility of a class of quantum cryptographic protocols that includes quantum bit commitment — a widely celebrated accomplishment and a gain for the discipline. He also co-invented quantum secret sharing and all photonics quantum repeaters, which are necessary to establish robust quantum signals for a quantum internet.

Over his career, Lo was a Founding Managing Editor of a leading journal, Quantum Information and Computation, and has co-edited two books. He holds several patents in the US and Europe, and in 2019 co-founded with his postdoc Dr. Mattia Montagna a quantum start-up in Toronto, Quantum Bridge Technologies Inc., to commercialize quantum-safe security solutions.

The medal is a community-wide distinction: CAP represents over 1,600 Canadian physicists and physics students while INO is Canada’s largest centre of expertise in optics and photonics.

“Professor Lo has earned this recognition with decades of ground-breaking work, and I couldn’t be happier for him,” says Professor and ECE Chair Deepa Kundur. “He’s had a massive impact on the direction of the field, and I suspect his influence will only grow as we enter the quantum era.”

“The quantum internet is coming,” says Lo, “and quantum computers are not so far behind. This award gives me a chance to look back, and I’m delighted and honoured to receive it, even as I look forward to the exciting technology to come.”