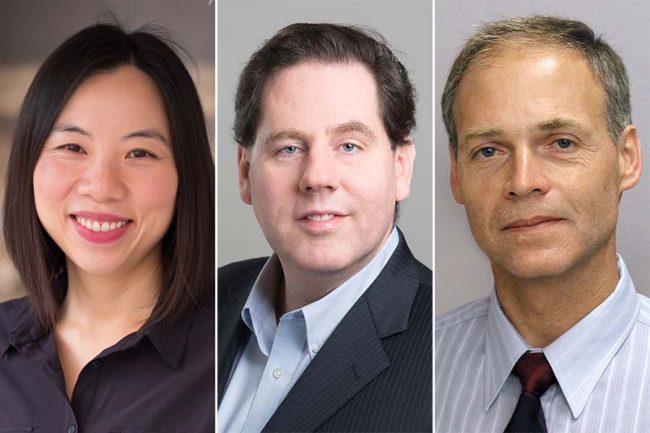 U of T Engineering professors Aimy Bazylak (MIE), Vaughn Betz (ECE) and Frank Vecchio (CivMin) have been elected 2022 Fellows of the Engineering Institute of Canada (EIC), for “excellence in engineering and services to the profession and to society.”

As the Canada Research Chair for Thermofluidics in Clean Energy, Bazylak is working to advance fuel cells, electrolyzers and batteries for clean power production and energy storage without greenhouse gas emissions. Her research is focused on the use of modelling and real-time imaging to design new materials for high efficiency and performance. She has partnered with automotive and energy companies such as Nissan, Volkswagon and Hydrogenics Corp. to develop next-generation fuel cells and electrolyzers for higher efficiency, zero-greenhouse gas emission power and energy storage.

Bazylak has served as the Director of the U of T Institute for Sustainable Energy and Acting Vice-Dean, Undergraduate for Engineering, and has been a member of U of T’s Committee on the Environment, Climate Change, and Sustainability since 2017. Her contributions have earned her several prestigious awards, including the Canadian Society for Mechanical Engineering’s I.W. Smith Award, the Alexander von Humboldt Fellowship, and the Helmholtz International Fellow Award. She is a member of the Royal Society of Canada’s College of New Scholars, Artists and Scientists and a Fellow of the Canadian Society for Mechanical Engineering and the American Society of Mechanical Engineers.

Betz holds the NSERC/Intel Industrial Research Chair in Programmable Silicon. His work has revolutionized the use of field programmable gate arrays (FPGAs), to allow engineers to rapidly create new hardware systems and realize their design visions. As a doctoral student, Betz created a packing, placement and routing tool and methodology, known as Versatile Place and Route (VPR), which is now the world’s most popular toolset for modelling new FPGA ideas. Betz cofounded Right Track CAD Corporation in 1998, growing the company to several million in annual revenue. After the company’s acquisition by Altera in 2000, he played a key role in the design of their next-generation chips, now used by tens of thousands of engineers.

In 2011, Betz joined U of T Engineering, where he continues to lead research to improve algorithms and design software to improve FPGAs. He mentors future entrepreneurs and has personally established several engineering scholarships. Betz holds more than 100 U.S. patents and has received 14 best paper awards from the field’s top conferences and journals. He is a Fellow of the Institute of Electrical and Electronics Engineers (IEEE) and the U.S. National Academy of Inventors, and recipient of the Ontario Professional Engineers Medal for Engineering Excellence.

“Professor Vaughn Betz has a long track record of success both in industry and academia, and we’re proud to have him as part of our faculty,” says Professor Deepa Kundur, Chair of ECE. “We see firsthand his commitment to the profession through his research, teaching and mentoring. Well done, Vaughn, and all 2022 EIC Fellows.”

Professor Emeritus Vecchio is the former Bahen/Tanenbaum Chair in Civil Engineering. An internationally respected authority on the behaviour of concrete structures, he has contributed substantially to increasing the safety and reliability of Canada’s infrastructure. Vecchio is the co-developer of the Modified Compression Field Theory, a groundbreaking conceptual model for describing the behaviour of reinforced concrete under general load conditions, which has been incorporated into design codes in Canada and internationally. He also developed a suite of software, called VecTor, for predicting the response of concrete structures to practically any action, which has been widely adopted for teaching and in industrial and research applications.

In addition to his research, he has significantly contributed to the development of standards and codes for concrete structures globally through his service on national and international technical committees. According to a recent Stanford University study, Vecchio has the highest citation score amongst Canadian researchers across all fields of Civil Engineering and ranks in the top 20 worldwide. He is a Fellow of the Canadian Society for Civil Engineering and the American Concrete Institute and has received several of these societies’ most prestigious awards.

“On behalf of the Faculty, my warmest congratulations to Professors Bazylak, Betz and Vecchio,” says U of T Engineering Dean Christopher Yip. “Their outstanding contributions illustrate some of the key areas in which U of T Engineers are making an impact across disciplines and sectors.”