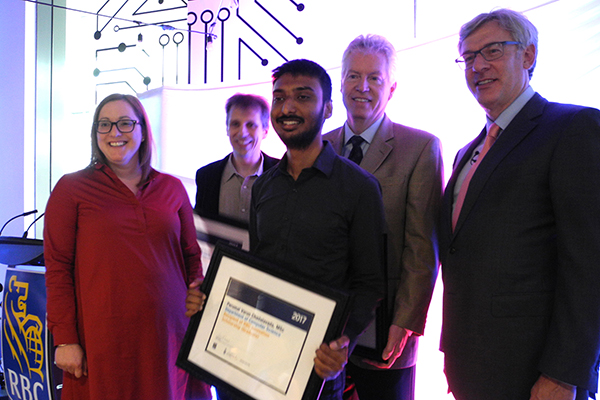 Professor Glenn Gulak of The Edward S. Rogers Sr. Department of Electrical & Computer Engineering (ECE) is one of four University of Toronto researchers recognized with an RBC Research Prize at the launch of the new RBC Research Institute, a collaboration with U of T.

Professor Gulak won a $25,000 prize for his work in developing better cyber-security systems for the financial sector. The algorithms on which the systems are based are “provably secure against the imminent arrival of quantum computers that will weaken virtually all of the attack surfaces currently secured by conventional forms of encryption,” Gulak said.

U of T researchers Gerald Penn, Cosmin Munteanu and Varun Perumal of the Department of Computer Science were recognized for their work in designing machine learning user interfaces and developing novel manufacturing materials, respectively.

David McKay, the CEO of Royal Bank of Canada, said Canada’s biggest bank is investing heavily in machine learning research in an effort to seize on Canada’s early lead in artificial intelligence and prevent top minds from leaving for the United States.

“We believe this will be a global destination for AI and AI research,” McKay told a packed room at the official launch party for the RBC Research Institute.

“RBC is one of the companies that felt responsible to act very quickly to help reverse the brain drain to south of the border,” said Agrafioti. “At the same, they can take advantage of the endless possibilities of technologies like deep learning and reinforcement learning in enterprise data analytics.”

With files from Chris Sorensen