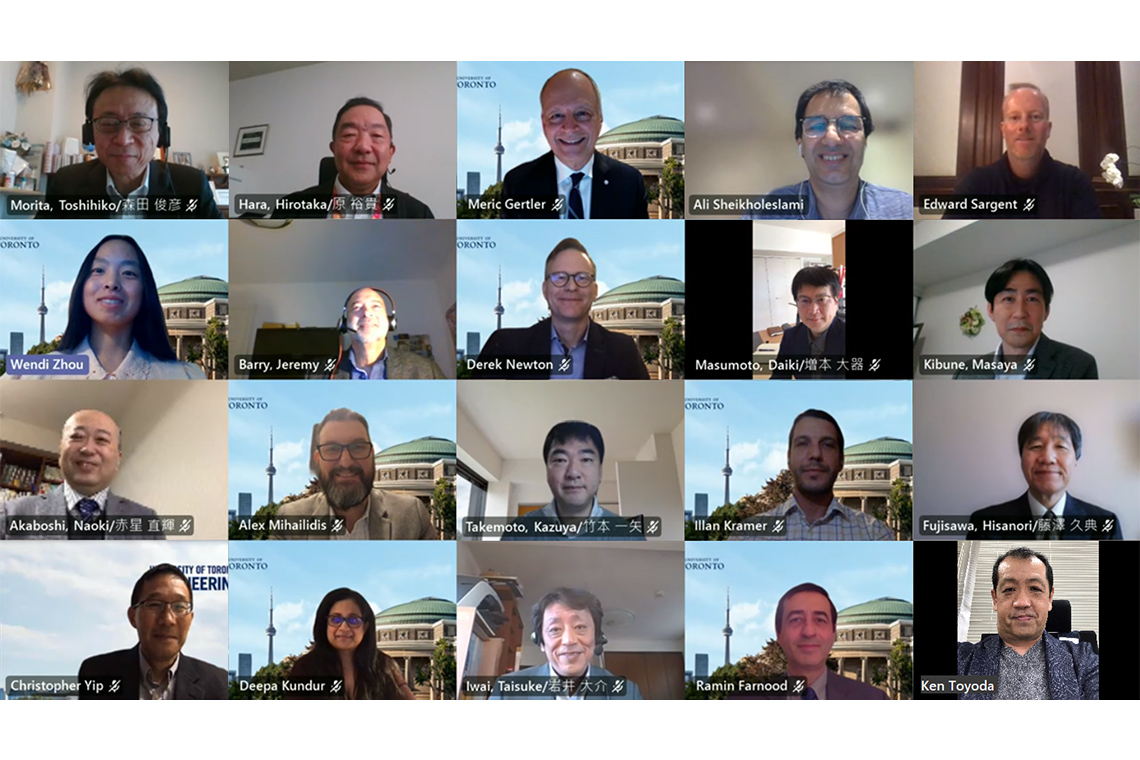 The University of Toronto and Japan’s Fujitsu Laboratories Ltd. have agreed to renew, for three years, a partnership that seeks to advance innovative computing research projects with wide-scale applications.

The partnership extension was marked this week by a transglobal videoconference that included Fujitsu CEO Hirotaka Hara and U of T President Meric Gertler, as well as other senior leaders and researchers.

The group discussed the progress of the partnership – which launched in 2018 and involved the establishment of the Fujitsu Co-Creation Research Laboratory at U of T’s Myhal Centre for Engineering Innovation & Entrepreneurship – and what can be achieved in the future.

“Fujitsu is one of the world’s most admired companies and Fujitsu Laboratories is a major engine of research and development in leading innovation clusters around the world including Beijing, Silicon Valley, London and now, of course, Toronto,” President Gertler said during the videoconference.

“The University of Toronto and our department of electrical and computer engineering both enjoy very high rankings globally, and we are the academic anchor of an impressive innovation ecosystem here in the Toronto region.”

Since its launch, the Fujitsu Co-Creation Research Laboratory has been credited with such major advancements as the advent of the Digital Annealer, a computing architecture that is inspired by quantum principles and can carry out operations beyond the scope of conventional computers, opening up potential applications in health care, drug discovery, finance, logistics, transportation and more.

Fujitsu also launched an R&D centre in Toronto in 2017 as part of its partnership with the university.

“Partnerships such as the one with Fujitsu foster both innovation and tech transfer,” adds Professor Deepa Kundur, Chair of ECE. “Our researchers are exposed to cutting edge problems within industry, while providing our partners access to the top minds in electrical and computer engineering.”

President Gertler said the collaboration between U of T and Fujitsu is testament to the richness of Toronto’s technology and innovation ecosystem.

“Toronto is increasingly recognized as a global investment destination,” he said. “The University of Toronto is a major factor in shaping that status and making Toronto so attractive, and the presence of Fujitsu Laboratories has helped raise this attractiveness even further”

Hara, who was appointed the CEO of Fujitsu Laboratories in 2019, said the company is excited about its ongoing association with U of T and the potential research outcomes of the partnership.

“As a global brand, Fujitsu is always looking for innovative solutions to real-world problems,” he said. “Through this partnership, we have the opportunity to work with world-class researchers to contribute to social impact.”

He added that the Fujitsu Co-Creation Research Laboratory was responsible for important developments.

The partnership between U of T and Fujitsu Labs can be traced back more than two decades to 1998, when Professor Ali Sheikholeslami, then a PhD student in electrical engineering at U of T, did a six-week internship at Fujitsu Labs.

Following the internship, Sheikholeslami continued to work with Fujitsu Lab researchers, and a formal collaboration was established after Sheikholeslami was hired as a faculty member at the Edward S. Rogers. Sr. department of electrical and computer engineering in the Faculty of Applied Science & Engineering.

Today, Sheikholeslami is the head of the Fujitsu Co-Creation Research Laboratory, which has engaged more than 10 faculty members and 25 graduate students and post-doctoral researchers from fields ranging from electrical, computer, mechanical and industrial engineering to medicine, finance and statistics.

In collaboration with Fujitsu, Sheikholeslami said the researchers aim to improve the speed, accuracy and flexibility of the Digital Annealer technology. He added quantum computing is another promising avenue.

“We would like to collaborate with Fujitsu and expand our collaboration into the area of quantum computing,” Sheikholeslami said. “As you know, a quantum computer is a natural extension of the Digital Annealer.

“What we would like to do is build quantum computing systems in the near future. We have a lot of expertise at U of T – all the expertise that it takes to build this quantum processing unit. We have expertise in physics, hardware, algorithm and in software. We will be discussing the possible collaboration.”

In his closing remarks, President Gertler lauded the progress achieved by the partnership and highlighted that the best is yet to come.

“As the platform expands now to include even more disciplines, no doubt it will enable even greater accomplishments in the years to come,” he said. “I, for one, will be truly delighted to follow its progress.”