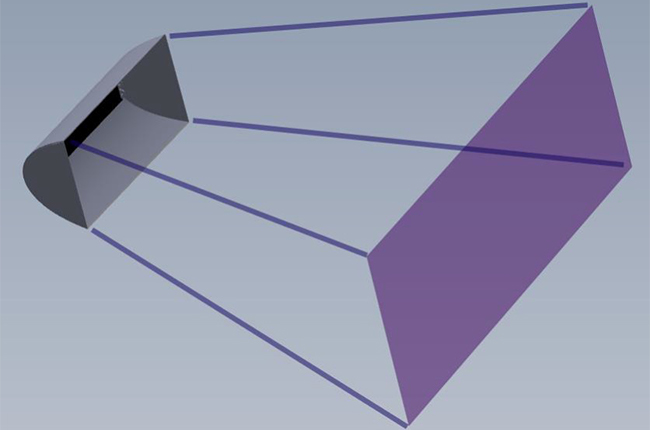 A U of T Engineering team, led by ECE graduate students, designed a UV lamp fitted with distance sensors to more efficiently disinfect contaminated surfaces. It has recently been prototyped. (Image: Jonathan Qu)

A team of U of T Engineering students is using the power of UV light to help stop the spread of COVID-19 and other virus-borne diseases.

They have prototyped a modular, smart UV lamp — dubbed LumineSense — that can be used to disinfect contaminated surfaces. By using sensors to monitor and adjust its light emission patterns, the device is designed to be more efficient than existing options, and at a lower cost.

The project received a boost from the Creative Destruction Lab (CDL) Recovery program, whose mission is to accelerate solutions to the COVID-19 crisis.

“The opportunity to apply technology to real-world problems is why many students were drawn to engineering in the first place,” says supervisor Professor Joyce Poon (ECE). “We wanted to make a positive difference with the great minds here at U of T Engineering.”

In the midst of the first lockdown in spring 2020, Poon sent out an open call to ECE students. Tisi was in the first group that signed up. He remembers the brainstorming meetings where they honed in on a problem to solve.

“Our original idea was to reduce the time it takes to disinfect transit vehicles after a shift and improve the turnaround,” says Tisi. “A lot of people were still using transit every day, especially front-line workers.”

The standard procedures typically involve liquid disinfectants, which are cheap, easy to use and widely available. However, disinfectants require personnel on site to spray and wipe, and hard-to-get-at areas can be easily missed. Chemicals in liquid disinfectants can also leave a residue on surfaces, and when used in environments such as dentist’s or doctor’s offices, can even harm sensitive equipment.

The team broadened its research and learned about another method often used in operating theatres and other such spaces: ultraviolet germicidal irradiation (UVGI). This system uses robots fitted with UV bulbs to sweep and spray the light indiscriminately on all surfaces, killing bacteria and viruses. The technique is effective, but these units are expensive, in the thousands of dollars.

An idea took shape: to design a smaller, less costly UV lamp that could be mounted on various fixtures and employed in different environments, such as stores, restaurants, labs and medical offices.

But the main differentiator for LumineSense would be the incorporation of the latest sensor technology to monitor how the light is applied.

“On the edges of the reflective collimator, the part that houses the UV bulbs, we mounted sensors to measure the distance from lamp to surface,” says Tisi. “They calibrate the exact dosage and duration of UV light required for sterilization, then shut the lamp off.”

Most of the planning for LumineSense was done in virtual meetings, with students coordinating from different engineering departments and across different time zones. Some members worked out of the Max Planck Institute in Halle, Germany, where Poon serves as a Director.

The hands-on process of putting together the prototype had its share of challenges.

“To comply with social distancing rules, we were allowed three people in the lab,” says Tisi. “Sometimes the person who knew the precise details of the programming or the electronics wasn’t there that day.”

As COVID-19 extended into the new school year, team members were jumping aboard as others bowed out. This sometimes left knowledge gaps, but it also led to a new sense of resiliency.

“We’ve done a lot of self-teaching,” says Tisi. “I don’t have a background in electronics but I had to learn how a circuit board works. I had no microbiology background either. Now? Maybe just a little.”

The team will continue to work with CDL on the marketing and business angles for LumineSense. Because the lamp shows promise for applications beyond COVID-19, the most pressing issue is continued testing, specifically at a Contaminant Level 3 facility, where malicious viruses are secured for research.

“I’m proud of how our cohort of students has responded to the COVID-19 pandemic,” says ECE Chair Professor Deepa Kundur. “Not only have they adapted to constantly evolving conditions while keeping up their studies, they have actively engaged as problem-solvers to address a great societal need.”