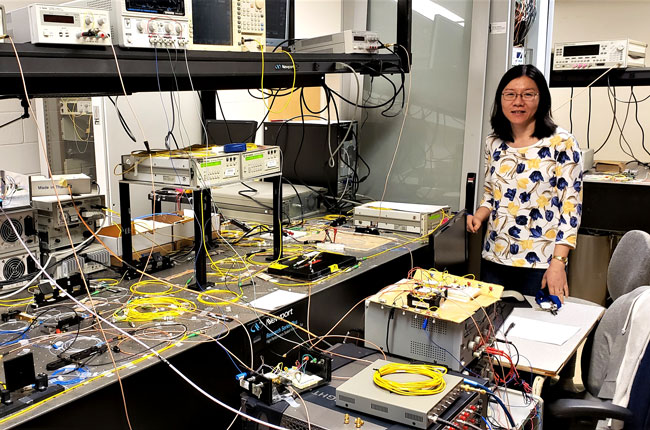 Professor Li Qian (ECE), shown in her lab pre-pandemic, is part of a research team that proposed a new quantum fingerprinting protocol, which is used to quickly and securely identify whether information from two sources is the same. (Photo: Don Figer)

Suppose you and a distant cousin are about to inherit some money, and you each have a version of the will on your computer. What is the least amount of information your computers must share to determine whether the versions are the same?

What you have on your hands is a communication complexity problem. Such problems deal with how much information you need to exchange — from computer to computer, from one part of chip to another, from network node to node — to perform a certain task or function. The less information transmitted to complete the task, the more energy and time saved, and the more privacy is preserved.

ECE Professors Li Qian and Hoi-Kwong Lo and physics PhD candidate Xiaoqing Zhong have developed an improved quantum fingerprinting (QF) protocol to more efficiently and securely solve these types of problems, which crop up in contexts such as computer networking, Very Large Scale Integration (VLSI) chip design, and others. The team’s protocol used the many different frequencies of a photon’s quantum state — a novel approach — to encode information. Their paper was recently published in Nature Communications.

“Let’s say you and your cousin each have a data file of a million bytes, a megabyte,” says Qian. “In classical protocol, the smallest ‘fingerprint’ required to determine whether the information is the same — to a certainty near 100% — is found by the square root of the total number of bits. So, a 1MB file would require the transmission of roughly 300 bytes. With quantum fingerprinting, the amount scales logarithmically: a 1MB file would only require around 3 bytes.”

The advantage becomes even more pronounced as the files get bigger, Qian adds.

“As the data string becomes larger and larger, quantum fingerprinting can drastically reduce the amount of information that you need to exchange.”

The QF protocol is achieved by exploiting a property called superposition. In classical communication, a photon encodes information as either a one or zero, but in quantum mechanics a photon can exist in many states between this binary. The possible combinations of these intermediate states are what allows each single photon to carry far more information, reducing the overall number and saving time, energy and bandwidth.

One challenge of implementing the QF is that the detectors used to register the photons are very sensitive and can produce signal noise. Currently, superconducting photon detectors must be housed in cryogenic dewars, which cool down the environment to milli-Kelvin temperatures. Still, random errors creep in.

The team’s improved QF protocol used a technique called ‘multiplexing’ — the simultaneous sending and measuring of many frequencies of photons — to speed up communication time and make QF much less susceptible to detector noise. In the lab, they demonstrated this measurement with six frequencies, but in principle it could be thousands, says Qian.

“It makes QF a more practical option,” she says. “We can use off-the-shelf components: run-of-the-mill semiconductor-based single photon detectors, which are orders of magnitude cheaper than superconductor detectors.”

Though QF is accessible technology in today’s marketplace, quantum communication is hampered by a lack of compatible infrastructure. Quantum signals are fragile, and though they can coexist with the classical signal in our present fibre optic network, they are easily contaminated. Much of the data terminal equipment in the existing network, such as amplifiers, switches and routers, is not suitable for quantum signals.

More research — currently ongoing in the joint labs of Qian and Lo — needs to be done to bring quantum and classical signals together in the same optical fibre.

“Engineering often finds a balance between the practical and the theoretical,” says ECE Chair Professor Deepa Kundur, “and Professors Qian and Lo’s research is a great example of this. They’ve fine-tuned a cutting-edge protocol with sights firmly set on the future landscape of telecommunications — and by doing so, are helping to realize it.”

When asked what motivated her to work on quantum technologies, Qian points to the uniqueness of quantum properties.

“They’re simply not found anywhere else in nature,” she says. “Think of how the unique property of lasers, coherent light, revolutionized optical technologies in a few short decades. I am convinced the quantum properties of photons will do the same.”