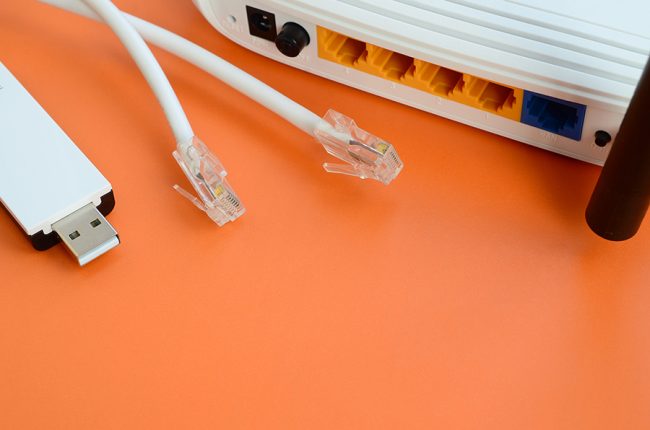 Wireless routers and ethernet among the many ways to connect to the Internet. (Photo: twenty20photos, via Envato)

Billions of people around the world use the Internet every day — to process payments, send messages to friends or watch their favourite shows on streaming services. It’s become so central to our lives we rarely stop to think about how it actually works — except when it goes down.

U of T Engineering Professor Alberto Leon-Garcia (ECE) is an expert in computer networks, including network monitoring and management. He sat down with writer Tyler Irving.

What is the Internet?

It is essentially a federation of independent, autonomous networks that agree on a common standard for sending information between them. This standard is known as the Internet protocol (IP).

Let’s say you work at a university, and you want to link together all those computers to each other. Each computer needs to have a unique identifier, which we call an Internet protocol address, or IP address, that consists of the network address and a host (computer) address. A server keeps track of the IP network addresses so that each computer knows how to find all the others.

Now let’s suppose you want to send a packet of information between two networks (autonomous systems) that both use the Internet protocol at two different universities. Each network already has a unique address, so the global Internet uses the network part of the IP address to direct the packet to the destination network.

That’s how it started. But now the Internet has nearly 100,000 networks all over the world, connecting five billion people, so it’s gotten a lot more complicated.

There are billions of devices connected now — more than there are people on earth — and new ones are being added all the time. The task of directing each packet from its home network to the destination network falls on IP routers.

You probably have a router that keeps track of all the devices within your home: TV, computers, tablets. That home router also connects to a router in your Internet service provider (ISP) that in turn keeps track of all computers and devices in its network. The ISP maintains a network of routers to transfer packets between computers that are directly connected to it. The ISP routers also transfer packets to gateway routers that connect to autonomous networks in the rest of the Internet.

The Internet itself consists of a federation of interconnected large autonomous networks such as your ISP. But the critical thing is that at these higher levels, the connections between these networks become decentralized. What this means is that there is no ‘top’ level, instead these large networks exchange information among themselves.

Each network maintains a list of what other networks they can reach. This enables protocols at the gateway routers can find paths from their network to any other network on the Internet. When you send information or ask for a file, an IP packet hops from router to router, getting progressively closer to its destination. Each router consults a table to determine the next hop.

So what exactly does my ISP control?

ISPs — in Canada, the big three are Rogers, Bell and Telus — provide the networks to access the global Internet. They own a network of routers, as well as communications systems (cable, copper, fiber, radio) to connect users and devices to their network.

But to become an ISP, you also need IP address space. This is a set of IP addresses that is totally unique and guaranteed to be different from all the billions of other devices on the Internet. Your ISP and your home router assign IP addresses to your computer and devices.

So when you pay for access through an ISP, you are paying for them to provide you with an IP address, to connect your device and its router network, and to transfer packets from your device to other devices in the global Internet.

Can you get online without going through an ISP?

There are some non-profit organizations that run their own networks to provide Internet access to their members. Most of them are associated with governments or public institutions, such as universities or hospitals.

For example, here at U of T we connect through ORION, which links more than a hundred such institutions across Ontario. There’s also a Canada-wide network called CANARIE. And of course, public libraries often offer free Internet access to their members.

But no matter how you do it, someone needs to maintain the physical and digital infrastructure that enables all these networks to talk to each other.

Is there a difference between accessing the Internet via WiFi versus cellular data?

Cellular phone networks were initially designed to provide voice communications over radio signals that connect a phone to a tower and then the telephone network. In the first and second generation of this technology, that’s basically all they could do, but the third generation (3G) cellular network marked a major innovation by allowing phones to send packet data and voice signals over the same radio system. By separating the packet data, it became possible for cellular network providers to provide access the Internet.

With LTE (4G), the mobile device was embodied in a computer connected to the Internet, and voice became one of the multitude of apps that exploded onto the market. Today, 5G provides connectivity and Internet access to devices in vehicles, factories, VR headsets, gaming and much more.

What does it mean when the ‘Internet is down’?

The Internet is ‘down’ for a single device if its packets cannot reach their destination networks. The cause for this may be a problem in your home router or in the connectivity to your ISP: for example, a neighbor may have cut a fiber or cable while working in their front yard. Sometimes cable or fiber cut by a construction crew can disconnect entire neighborhoods.

A more severe form of the ‘Internet is down’ occurs when an entire community or region cannot access the Internet. Major cable or fiber cuts can cause this, but a much trickier situation arises when the network of routers does not function as it should. The routers maintain tables that direct each packet along its next hop in its path to the destination network — like a map instructing the packet how to get there. The ISP is responsible for packet transfer both within its own network, and to hand off packets to networks in the rest of the Internet.

If the gateway routers of an ISP receive faulty information from outside networks, then it is possible that packets from the ISP may be unable to reach certain networks on the Internet. On the other hand, if the tables inside an ISP’s routers are corrupted or misconfigured then mechanisms should kick in to maintain route stability and to isolate or contain the affected areas of the network.

Unfortunately, in some situations these mechanisms may make matters worse — for example, by creating routes that direct traffic flows to routers that cannot handle them. These situations can cascade leading to massive and prolonged loss of Internet service. It would be as if the major highways around a city became blocked, and all traffic attempted to leave the city through narrow streets and roads.

Story from U of T Engineering News