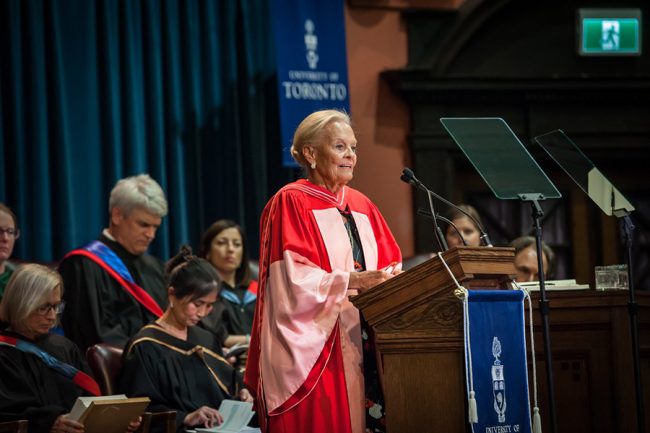 On June 21, 2022, the University of Toronto flag flew at half-mast in memory of Loretta Rogers, who died in early June at the age of 83. For decades, Loretta and her husband Ted Rogers, Jr., who died in 2008, were among the most consequential benefactors of U of T Engineering.

Today, their legacy continues to power world-leading research — from advances in communications technology to new insights into the workings of the human heart. Their support for students has helped launch the careers of thousands of engineering leaders around the world.

“Ted and Loretta Rogers have had a tremendous impact on all aspects of our Faculty,” says Chris Yip, Dean of U of T Engineering.

“Their landmark contributions changed the face of this institution. Critically, they understood the vital importance of collaboration, both within engineering and beyond, to spark new discoveries, new technologies and new ventures. Their presence will be felt for decades to come.”

The Rogers family began to sponsor student scholarships at U of T Engineering starting in the 1990s. In 2000, they increased their involvement with a landmark contribution of more than $25 million that created a suite of new programs and institutes.

The Edward S. Rogers Sr. Department of Electrical and Computer Engineering was named in honour of Ted’s father, who was a student in the department from 1919 to 1921. Edward S. Rogers Sr. was a pioneer in communications technology who created a power supply that could be used to connect radio receivers — which were then powered almost exclusively by costly batteries — to household alternating current.

In addition, the gift created two new research chairs: the Velma M Rogers Graham Chair in Engineering and the Edward S. Rogers, Sr. Chair in Engineering. Both have been held by multiple faculty members over the ensuing decades, and their impact can easily be seen by surveying the accomplishments of the current chairholders.

Professor George Eleftheriades (ECE) holds the Velma M Rogers Graham Chair in Engineering. He and his team specialize in metamaterials, which have electromagnetic properties not found in nature. One example is a flat, thin antenna that focuses electromagnetic waves into a concentrated beam, and could help provide services such as internet access to the more than 3 billion people who currently live without it.

Professor Brendan Frey (ECE) holds the Edward S. Rogers, Sr. Chair in Engineering, and is the founder of Deep Genomics. This company uses deep learning techniques to analyze biochemical data with the goal of identify potential targets for therapy. In 2019, Deep Genomics identified a molecule that could be used to treat a genetic disorder known as Wilson disease, the first time ever that a potential drug candidate has been identified solely by the use of artificial intelligence.

Professor Deepa Kundur (ECE) is the Chair of the Edward S. Rogers Sr. Department of Electrical and Computer Engineering. She was also one of the first recipients of the Rogers family scholarships.

“As a student, receiving a Rogers scholarship had a profound impact on my own undergraduate experience here and helped me to find my path to the research that would become my life’s work,” says Kundur. “Later, as a graduate student, a professor and now Chair, I’ve seen the lasting effect these scholarships have had on our students while here at U of T and globally as they embark on their journeys as ECE alumni.”

In 2014, the Rogers Foundation made a landmark gift of $130 million, at the time the largest private donation in the history of Canadian health care, to create the Ted Rogers Heart Research Centre. The gift has fuelled a unique partnership between SickKids, the University Health Network and U of T to seek new diagnoses, treatments, and tools to help people prevent, manage, and survive heart failure. Loretta Rogers served as the honorary patron of the Ted Rogers Centre for Heart Research, which was conceived with the spirit of innovation held by Ted Rogers himself, who experienced heart failure.

Several U of T Engineering faculty members, and their respective labs, assembled in the Ted Rogers Centre as part of a novel Translational Biology & Engineering Program (TBEP). There, in a collaborative environment with multidisciplinary teams, investigators and trainees target the complex genetic, molecular, and cellular physiology that underpins heart failure in pursuit of the most promising strategies to diagnose and treat heart disease and repair and regenerate heart tissue.

One inspiring story comes from former student Bailey Bernknopf (BME MASc 1T9). Bernknopf was born with four congenital heart defects, and had her first surgery at five months old, followed by another at age 14. The experience inspired her to seek out world-leading researchers in the field.

While still a student at Laurier University, she arranged to complete a summer research position in the lab of Professor Craig Simmons (BME) – who leads TBEP – which eventually inspired her to join his team as an MASc student. Her thesis investigated the way that aortic valve disease affects men and women differently.

“The team in Professor Simmons’ lab studies molecules that shows promise in protecting against aortic valve tissue scarring,” she said in 2017. Bernknopf is now an MD candidate at U of T’s Temerty Faculty of Medicine.

“This is important because we know that women are more likely to have valve scarring than men, so I will be determining the molecular basis for the sex-dependent nature of aortic valve disease. Also, I have a bicuspid aortic valve so I am predisposed to develop this disorder at a younger age.”

In the years since its creation, TBEP has grown into a state-of-the-art facility and an incubator of cardiovascular innovations. It has fostered the careers of hundreds of trainees and partnered with more than 30 external companies.

It continues to be home to many leading-edge research chairs, including the Loretta Rogers Chair in Immunobioengineering. Most recently, the centre created the Ted Rogers Chair in Cardiovascular Engineering, which seeks to leverage wearable electronics technology to design new devices that can non-invasively monitor heart function, improving the ability to diagnose and treat heart disease.

Though the Rogers family’s connection to U of T Engineering are far-reaching, their contributions are felt across the University’s campuses. “In the course of U of T’s history, few have forged change like Loretta Rogers,” said U of T President Meric Gertler.

“Her impact on research, academic programs and student financial support has transformed lives, created hope, and moved society forward. She was one of a kind. I offer the University’s sincerest condolences to Lisa, Ed, Melinda, Martha, and all the Rogers family.”

Story from U of T Engineering News, with files from Jess MacInnis