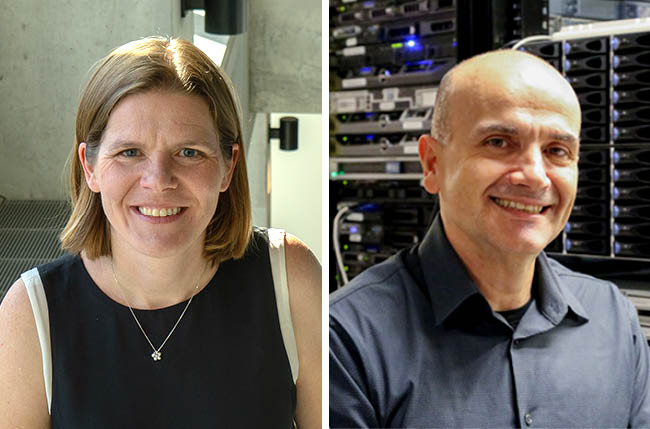 Professors Natalie Enright Jerger and Andreas Moshovos of The Edward S. Rogers Sr. Department of Electrical & Computer Engineering (ECE) have achieved the prestigious status of IEEE Fellow. This designation by IEEE, the world’s largest technical professional association, is reserved for those members whose research in engineering, science and technology have shown significant value to society.

For Enright Jerger, becoming a Fellow is a reminder that “one’s career is something that develops over time and has a long arc.”

She was cited by IEEE for her “contributions to networks-on-chip (NoCs) for many-core architectures.” NoCs are a mechanism that allows multiple processors on a single chip to talk to one another, relieving some of the “congestion” that occurs as computer chips continue to shrink in size.

Over the years, NoCs have become a central design feature in many-core architectures and are expanding into other functional designs. Though relatively young technology, it’s poised to take off.

Enright Jerger was there in the early years. NoCs were her research focus in 2009 when she joined ECE. She has since branched into other areas — approximate computing, machine learning and Internet-of-Things devices, to name a few — but recently has come full circle, collaborating with U.S. researchers to resolve message deadlocks on NoCs and make them more energy and resource efficient.

It’s been exciting for her to see how her ideas shaped the development in the field, including the widespread adoption of the textbook she co-authored, On-Chip Networks, now in its second edition.

Moshovos’s research emphasized behaviour-based techniques. These in effect allow chip components to figure out on their own what the application prefers, which better serves computation needs and energy constraints.

Looking back on his career thus far, he singles out RegionScout, a filtering technique to monitor the coherence status of large regions of memory to improve system performance and power consumption. He developed this project after hours while serving a mandatory term with the Hellenic Armed Forces for a year and a half.

Professor Deepa Kundur, Chair of ECE, sees the elevation of Professors Enright Jerger and Moshovos as emblematic of the department’s research strength. “A sincere congratulations to both for achieving this milestone in their careers. It is a wonderful recognition of their stature in their fields.”

Enright Jerger and Moshovos both mention that their career path has brought them into contact with some remarkable people.

“I’ve had the opportunity to work with such talent throughout the years,” says Moshovos. “Truly — in every single piece of work I have been involved with. I’m humbled by this recognition of my peers, and very appreciative of the support from my colleagues and students at the University of Toronto and elsewhere.”

Enright Jerger seconds that sentiment and adds, “Awards really can be humbling.”

If she could, she would offer a piece of advice to her younger self: “Some research takes years to come to fruition, and there are setbacks and bumps along the way. But you get there eventually.”