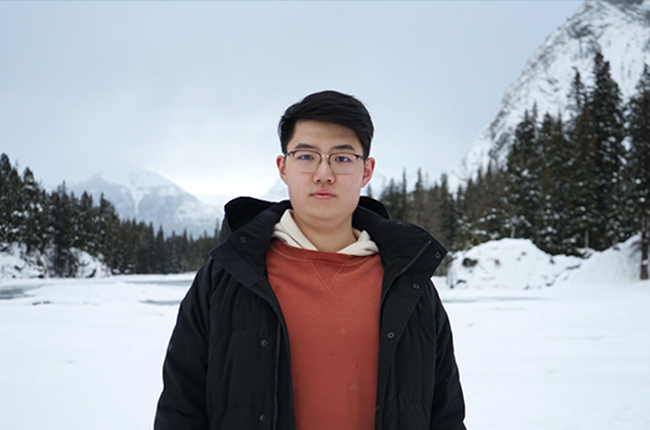 Shengxiang Ji will join Intel, where he completed his PEY Co-op, as a software development engineer later this summer. (Photo supplied)

Alumnus Shengxiang Ji (CompE 2T0 + PEY) has been selected as one of three students graduating from U of T with a bachelor’s degree to receive the Governor General’s Silver Medal Award. The medal is awarded for academic excellence.

The Silver Medal is one of four levels of awards conferred by the Governor General for academic excellence. Ji joins former ECE graduate student and Gold Medal winner Mingyang Wei as recipients this year.

“I definitely did not set out to win this award,” says Ji, “but I’m really honoured. It’s the result of doing the everyday things it takes to succeed, so I’m proud to be recognized for that.”

Ji’s path as an undergraduate student was not always clear to him. “Some students know exactly where they want to end up as soon as they start, but I wasn’t sure which direction I wanted to go,” says Ji. “That’s the great part about ECE. There are so many opportunities to try things out and get a feel for all the options available.”

He knew he’d be faced with the decision to pursue academia or industry after graduation, so while he was an undergraduate student he tried both, to see which was the best fit for him. After his second year, he worked in ECE Professor Baochun Li’s lab as a summer research student, and after third year he embarked on a PEY Co-op placement at Intel.

“Working closely with a professor and graduate students, as I did with Professor Li, gave me a window into what an academic career might look like,” says Ji. “And my experience at Intel was a great way to apply what I had been studying to industry while working alongside incredibly talented people.”

A few months into his PEY Co-op the pandemic hit, and Ji completed his placement by working from home. For his final year of study, Ji developed strategies to help mitigate some of the challenges of remote learning.

“The most difficult part was keeping up with lectures. It’s easy to think ‘I can just watch that later,’ but things can really pile up,” says Ji. “I decided to keep a schedule as if I was still attending lectures in person, and this helped make sure I wasn’t caught off-guard for an exam or test.”

In addition to implementing time management strategies, Ji offers some advice for new students joining U of T in the fall: “I think it’s important to grasp not only what is being taught, but why it’s being taught,” says Ji. “When presented with a new concept in a lecture, look at the big picture, how it relates to what you’ve already learned and what you’ll be learning next. You’ll understand it better and how to apply it when solving problems.”

“Despite both expected and unexpected challenges during his time as an undergraduate student, Shengxiang has demonstrated tenacity, resilience and dedication throughout the course of his studies,” says ECE Chair Professor Deepa Kundur. “My sincere congratulations on receiving the Governor General’s Silver Medal and we wish him continued success.”

Ji received a return offer from Intel and will join their Toronto office later this summer as a software development engineer. While he’s looking forward to embarking on his career, he’s also looking back on his time as an ECE student.

“It was both very challenging and very enjoyable. It’s been a great journey.”