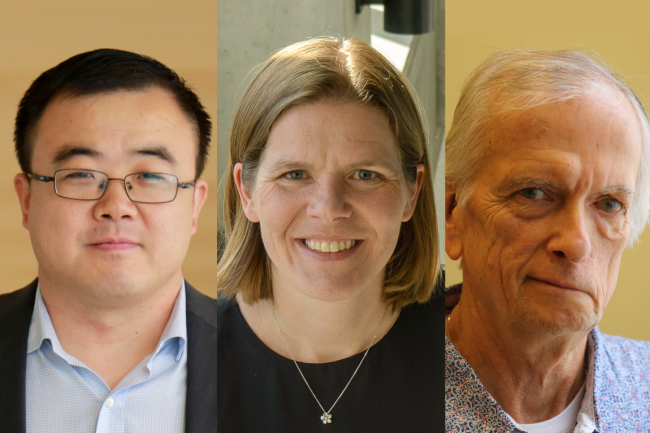 Three U of T Engineering professors have been recognized by the Engineering Institute of Canada (EIC) for their distinguished contributions to engineering.

Professor Michael Carter (MIE) has received the Julian C. Smith Medal for “achievement in the development of Canada,” while Professors Natalie Enright Jerger (ECE) and Xinyu Liu (MIE) have been elected EIC fellows for “excellence in engineering and services to the profession and to society.”

“On behalf of the Faculty, congratulations to Professors Carter, Enright Jerger and Liu on these well-deserved honours,” says U of T Engineering Dean Christopher Yip. "This recognition by the Engineering Institute of Canada reflects the wide-ranging contributions and impact of our faculty members as researchers, innovators and educators.”

As the Canada Research Chair in Computer Architecture, Enright Jerger designs new ways of arranging the components of computer processors to optimize performance. Her work helps manufacturers like Intel, AMD and Qualcomm build faster devices while keeping power usage and costs low, resulting in smarter smartphones and more powerful computers. She is co-author of the popular textbook On-Chip Networks, now in its second edition, used in graduate courses at several leading universities.

Enright Jerger is a leader in her professional community and served as the program chair for the 2014 International Symposium on High Performance Computer Architecture — the first woman and the youngest person to ever chair the conference. She has also served on the executive committees of the most influential governing bodies in computer architecture.

Enright Jerger has led efforts to improve diversity and advance women in the computer architecture field. She has chaired the Women in Computer Architecture networking group and was co-chair of the Association for Computing Machinery’s Council on Diversity and Inclusion. She is a fellow of the Institute of Electrical and Electronics Engineers (IEEE) and has received several national and international awards.

“Such wonderful news to see Professor Enright Jerger recognized,” says Professor Deepa Kundur, Chair of ECE. “By combining impactful research in her field with dedicated engineering community-building efforts, she is a shining example of excellence in our department. Congrats, Natalie!”

Carter, who is the founder of U of T’s Centre for Healthcare Engineering, is a recognized leader in systems engineering approaches to health care, influencing health policy and practice across Canada through his leadership positions, educational initiatives and work with health-care organizations. He is using simulation modelling and other operations research tools to help the health-care industry make decisions that improve quality of care, reduce costs and increase efficiency. He has helped demonstrate the important role of engineering in Canada’s health-care system, and the tools he has created are used by government and health-care organizations throughout the country.

Carter also developed Canada’s first health-care engineering courses and led the creation of the MEng Certificate in Healthcare Engineering at U of T. He is a fellow of EIC, the Institute for Operations Research and Management Science (INFORMS), the Canadian Academy of Engineering and the Canadian Academy of Health Sciences, and garnered the Canadian Operational Research Society Award of Merit for lifetime contributions to operations research. He has also received the Northrop Frye Award and the President’s Impact Award from U of T, as well as many teaching awards.

Liu is internationally recognized for his innovative contributions in paper-based microfluidics, microrobotics, and flexible/stretchable sensors, with applications in disease diagnostics and treatment, basic biology research and wearable electronics. Most notably, he has developed a series of paper-based microfluidic biosensors for rapid point-of-care diagnosis for diseases such as HIV, hepatitis, prostate cancer, cardiovascular disease and COVID-19. Liu has published 106 articles in high-impact journals, as well as 84 conference papers, three books and 13 book chapters. He is a co-inventor on 13 patents, with six licenced to industry.

Prior to joining U of T, Liu was the Canada Research Chair in Microfluidics and BioMEMS while at McGill University. His many awards include the Douglas R. Colton Medal for Research Excellence and eight best paper awards from major engineering and medical conferences. He is a fellow of the Canadian Society for Mechanical Engineering and the American Society of Mechanical Engineers (ASME). Liu is co-chair of the IEEE Robotics and Automation Society Technical Committee for Micro/Nano Robotics and Automation. He has served on the editorial boards of eight international journals and organized several IEEE/ASME conferences.