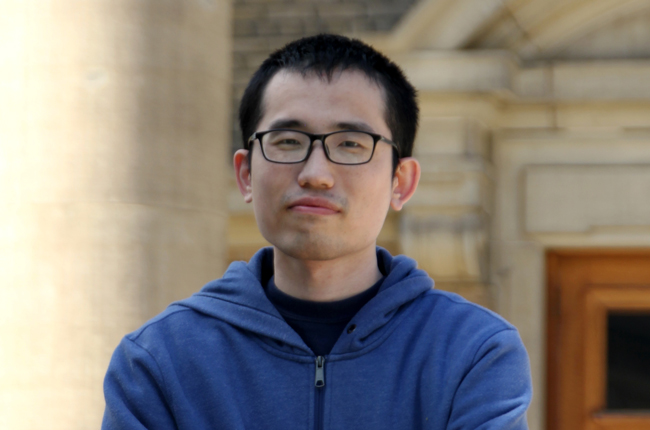 Mingyang Wei (ECE PhD 2T0) is one of three former U of T students who received the Governor General’s Gold Medal for academic excellence, one of the highest honours reserved for graduate students in Canada.

The medal, awarded each year to three students determined to have the highest academic standing, is one of the highest honours reserved for graduate students in Canada. Candidates are evaluated on the basis of their performance in degree courses, the merit of their thesis and its defense, and the originality and importance of their research.

Wei has always wanted his work to have a positive social impact. As an undergraduate student in Physics at Peking University, he was inspired to pursue a socially conscious path when the 2014 Nobel Prize for Physics went to the three scientists who had invented the energy-efficient blue LED. He recalls thinking that something as small as the LED could change the whole world, and that he wanted to do something that would make a difference.

The recent PhD graduate is certainly well on his way, having won the 2020-2021 Governor General’s Gold Medal at U of T for his work on next-generation solar cells, a crucial technology in efforts to address climate change. But Wei remains humble about his academic success. “I’ve applied for awards in the past and not gotten them, so I wasn’t expecting to receive it at all,” he says, laughing. “It’s a great honour. I’d like to thank everyone involved in the process.”

At the University of Toronto, Wei’s research focused on the development of tandem solar cells made out of metal halide perovskites, a next-generation material that can convert sunlight into electricity without needing the area required by silicon solar panels. Under the supervision of Professor Ted Sargent, Wei developed a semi-transparent solar cell that looks like glass and can be incorporated into modern-day building facades.

Wei says he has learned a lot from his mentor, who received a JJ Berry Smith Award for Doctoral Supervision last year. “Ted’s a very friendly person, and very encouraging,” says Wei, who decided to apply to U of T after a phone conversation with his future supervisor. (Where his friends put in 15 or more graduate school applications, Wei was so sure he wanted to work in Sargent’s group that he only applied to the University of Toronto.) “He’s a very busy person, but he’s always reachable,” he continues. “When you have a problem or a ask a question, he always tries to respond immediately.”

“Here at ECE, we’ve seen firsthand Mingyang’s hard work and talent during his graduate years,” says Professor Deepa Kundur, Chair of ECE. “We’re thrilled he’s received this distinction. Foremost a credit to him, it’s also a credit to Professor Sargent and his team, and a reflection of the department’s commitment to excellence.”

In September, Wei will embark on a two-year Marie Sklodowksa Curie postdoctoral fellowship in Switzerland at École polytechnique fédérale de Lausanne, where he will continue his work on developing large-area perovskite cells. The avid researcher is looking forward to it.

“I find the whole process of discovering things and exploring things very exciting,” says Wei. “It gives me a sense of satisfaction, like I am doing something creative.”

This story originally appeared on U of T’s School of Graduate Studies. The other the award winners are Ido Katri (Faculty of Law) and Kieran Quinn (Institute of Health Policy, Management, and Evaluation).