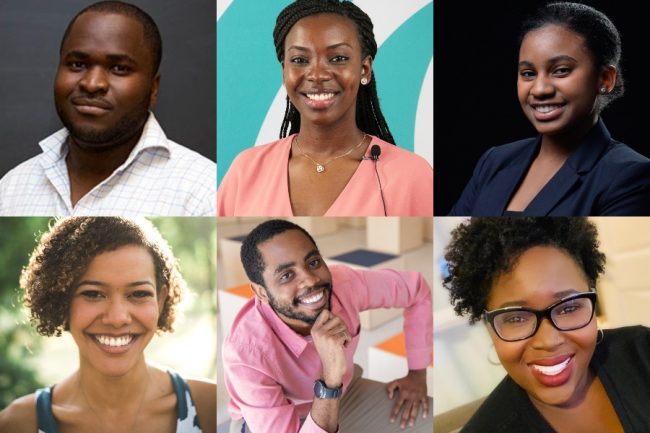 Past and present NSBE U of T presidents reflect on the legacies they’ve left behind and the impact the chapter has had in improving Black inclusion at U of T Engineering. (From top left, clockwise: Iyiope Jibodu, Akira Neckles, Alana Bailey, Dimpho Radebe, Mikhail Burke and Kelly-Marie Melville.)

Kelly-Marie Melville (ChemE 1T2 + PEY) was in her dorm room, just two weeks into her studies at U of T Engineering, when a fellow student Korede Owolabi (CompE 1T5 + PEY) and member of the National Society of Black Engineers (NSBE) U of T chapter came knocking on her door.

“He gave me a full rundown about NSBE, and I didn’t fully understand the gravity of it at the time,” says Melville. “But once I started my classes, I got it.”

Melville remembers sitting in Convocation Hall, where all first-year engineering students traditionally gather for their first class together.

“It was intimidating for someone who just moved here from Trinidad and for someone who is just starting engineering. I remember thinking, ‘oh my goodness, there is no one here who looks like me.’”

NSBE, founded in 1975 at Purdue University, aims to promote, support and increase the number of Black engineers who excel academically and professionally. Each year, the NSBE National Convention brings thousands of members together for networking and professional development opportunities. The organization’s goal is to graduate 10,000 Black engineers annually by 2025.

The U of T chapter, founded in 1999, is the largest in Toronto. And for more than 20 years, NSBE U of T has played an important role in increasing Black inclusion at U of T, and in fostering a safe space among Black engineering students, who continue to be underrepresented among the student body.

Three years after that knock on the door, Melville was NSBE president (2009 to 2010), and found herself using the same recruitment strategy. “Sometimes I was even chasing students down in the hallways to talk to them [about NSBE],” she says.

One of the students she introduced NSBE to was Akira Neckles (ChemE 1T7 + PEY), who would also eventually become president (2016 to 2017). During her studies, Neckles remembers seeing only five Black students within her year.

“That can really make you feel like you don’t belong,” she says. “With NSBE, it felt like it brought us together. Within a program, we’re less, but within a group, we’re more.”

Over the years, each NSBE U of T president would bring a unique vision and leave their own legacy of impact.

During Melville’s term, she worked to significantly increase NSBE U of T memberships. For Neckles, her focus was on professional development, inviting organizations to U of T so that members were informed of career pathways, even before looking ahead at their Professional Experience Year (PEY) Co-op.

During Dimpho Radebe’s (IndE 1T4 + PEY, ChemE PhD candidate in EngEd ) presidency (2014 to 2015), she was challenged with keeping NSBE U of T afloat, as memberships began to dwindle.

“I think the biggest challenge for NSBE is that, although it is an organization created to support Black students, we’ve always said, we’re open to everyone and not exclusively to Black students,” explains Radebe. “But many students don’t realize that, and it makes our potential pool that much smaller.”

Radebe says one of her greatest achievements during her leadership was sending 10 students to the NSBE National Convention in Anaheim, Calif.

“That experience really inspired students to join because they can see the full power of NSBE versus when you don’t see many of us around at school,” she says. “Many of them ended up running for leadership positions after that.”

For Iyiope Jibodu (ChemE 0T8 + PEY), it was about “NSBE family and NSBE love.” As president from 2008 to 2009, he was instrumental in launching D-Battle, a student dance competition that would attract large crowds to the Sandford Fleming atrium. D-Battle started as an idea by Owolabi to increase membership — the event would become a staple NSBE event for years to come.

“NSBE had a reputation as a professional student group, but we took the risk to host D-Battle, which turned out to be a fantastic platform to increase awareness on campus,” says Jibodu. “By having a fun event with mass appeal, we brought the entire Faculty together and showcased our strong and vibrant community.”

During Mikhail Burke’s (MSE 1T2, IBBME PhD 1T8) presidency (2010 to 2011), he would play a pivotal role in founding ENGage, an outreach program for Black students in Grades 3 to 8 that sparks passion for STEM (science, technology, engineering and math). ENGage has been running for more than a decade out of the U of T Engineering Outreach Office, and would pave the way for Blueprint, a new program designed for Black high school students interested in STEM.

Alana Bailey (Year 3 CivMin) is NSBE U of Ts current president and has had a term like no other — having to lead from home during the pandemic. Despite this challenge, Bailey has set out ambitious goals.

Her mission when she took office in May was to have each executive member recruit at least five students — this led to a growth of more than 60 members by September 2020. Under her leadership, NSBE U of T has been more involved in Faculty recruitment events, as well as leading their own high school outreach efforts.

This year, NSBE U of T has also brought in more external sponsors to support initiatives — most recently, NSBEHacks garnered a wide range of sponsorships with leading companies such as Google, NVIDIA and Shopify, just to name a few.

“If students need help to go to a conference or to enrol in an expensive course, our hope is to have the supports to actively help them achieve that,” says Bailey.

Bailey has three months left in her term, before she takes up her PEY Co-op position next fall. She plans to stay in close contact with NSBE, and she isn’t alone in wanting to stay in touch — many former presidents and members continue to advise, mentor and participate in NSBE U of T events.

That includes Burke, who is now the Dean’s Advisor on Black Inclusivity Initiatives and Student Inclusion & Transition Advisor at U of T Engineering. Over the last decade, he has seen and participated in many efforts by U of T Engineering to address Black underrepresentation — and NSBE has always played a role.

“There’s been a shift in what the Faculty feels empowered to do and it’s a good start, but there’s always room to do more. We have to continue to lean into the discomfort of talking about the lack of Black representation and about anti-Black racism on campus,” he says. “Organizations like NSBE are key advocates in driving the Faculty to engage in that change.”