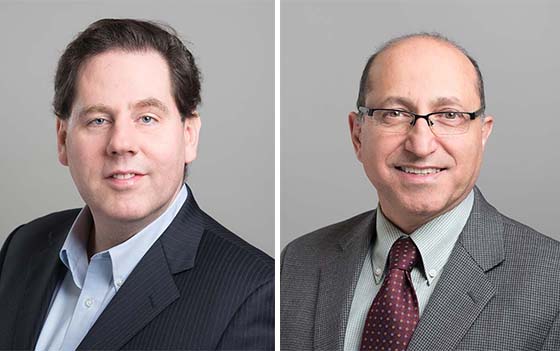 Professors Vaughn Betz (left) and Shahrokh Valaee were named Fellows of the IEEE in the 2020 cohort.

Professors Vaughn Betz and Shahrokh Valaee have been named Fellows of the Institute for Electrical and Electronics Engineers (IEEE). The two professors in The Edward S. Rogers Sr. Department of Electrical & Computer Engineering (ECE) were inducted in the 2020 cohort, joining 33 ECE faculty members, including Emeritus Professors, who hold the grade of fellow.

Professor Betz was elevated with the citation “for contributions to Computer-Aided Design of Field Programmable Gate Arrays (FPGAs).”

Professor Betz’s interest in FPGAs began with his PhD thesis, a Computer-Aided Design (CAD) program that could map hardware designs into FPGA chips with a higher degree of flexibility. The program also allowed researchers and industry to virtually prototype a chip before turning it into silicon. “Looking back on my career the achievements I’m most proud of were ones where I combined ideas or challenges from two domains,” says Professor Betz, “With FPGAs that combination was creating a software program to help design hardware.” The program has evolved since his PhD and its various versions and descendants now form a key part of Intel’s CAD tools and chip designs, open-source academic projects, and countless other iterations.

Professor Valaee was elevated with the citation “for contributions to localization of wireless nodes.”

Localization is the process of locating wireless terminals in both indoor and outdoor environments. “In outdoor environments, the Global Navigation Satellite Systems (GNSS) is commonly used,” says Professor Valaee, “But in dense areas, especially indoors, the limits of the GNSS are noticeable.” Valaee’s research applies WiFi and cellular technology for accurate localization in these dense areas where the strength of the incoming signal helps orient the device’s location.

Professor Valaee became interested in this research during his PhD studies while attending an IEEE conference. A publication at the conference piqued his curiosity and later he published the very first paper on localization of distributed sources, which became a seminal reference on the subject. After joining the University of Toronto in 2001, Valaee continued his research on localization and has since published key papers on the subject and holds several patents in the field.

“Throughout my career there have been many meaningful milestones,” says Professor Valaee. “Being honoured by my peers in the IEEE for those milestones is very rewarding.”

The IEEE is the world’s largest technical professional organization dedicated to advancing technology for the benefit of humanity and has more than 423,000 members in 160 countries. Each year less than one-tenth of one-percent of the total voting membership of the IEEE are elevated to Fellow — the highest grade of membership.

“Congratulations to Professors Betz and Valaee on this significant career milestone,” said Professor Deepa Kundur, chair of the ECE department. “This well-deserved honour reflects their innovation and leadership in their respective fields.”